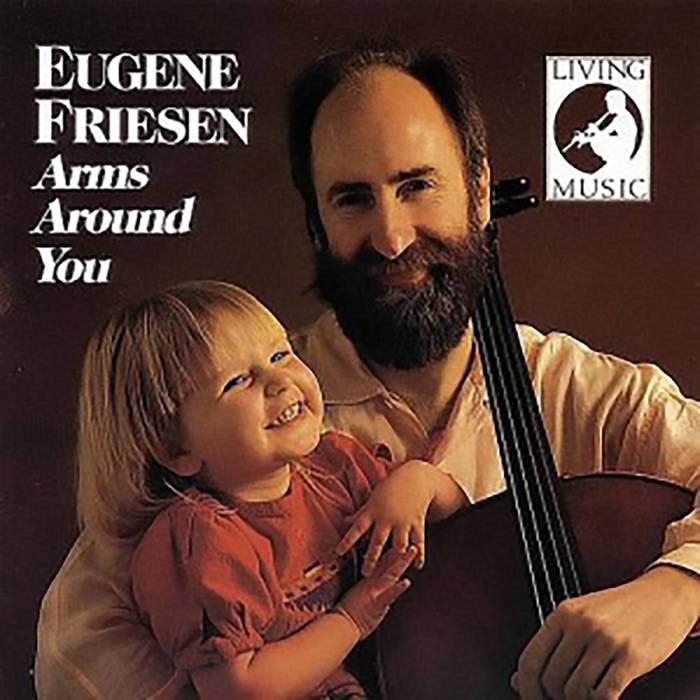 Arranged for a large band, which includes Paul Winter, Paul Halley, Ted Moore, Glen Velez, Gordon Johnson, Russ Landau, Paul Sullivan, John Clark, Paul Wertico and David Blamires, ARMS AROUND YOU has up to 30 cello parts on some tracks. With Friesen's voice (a personal 'scat' style and lyrics on two songs), and some very exciting percussion, bass, saxophone, keyboards and French horn, Friesen's first solo album showcases his dynamic compositions and the unique voice he discovered on his instrument.

"When I was a kid, pulling my cello in a little red wagon to and from elementary school, absorbing the sounds of Bach, Brahms and the 60's, I dreamed of someday doing something wild, something beautiful, personal and unique with the cello. [...] As a student, I was devoted to the traditional repertoire for cello, which led me on a path all over the world for the next five years. It was then that Paul invited me to join the Consort, which was a great opportunity to again explore my fascination with musical composition and improvisation.

"While my first album, NEW FRIEND, is a collection of freely-improvised duets with keyboardist Paul Halley, ARMS AOUND YOU is an album for a large band. [...]

"Some albums are produced under pressure in slick studios with high hourly rates. ARMS AROUND YOU was recorded over the course of a winter at the Living Music studio on Paul Winter's farm in New England. A slick studio it is not... in fact, our original album cover suggestion was a photo of our musical tribe carrying in armloads of firewood for the wood stove. Many overdubs were done in overcoats and fingerless gloves, but on the positive side, there were no pressures and clocks. We were free to just do our work.

"[...] ARMS AROUND YOU is music for the sake of music. It's inspired by my love for my children, whitewater rafting, the challenge of choosing values in a materialistic world and, mostly, the joy and satisfaction of expressing in music this adventure of living.

"It is with humility and pleasure that I offer our ARMS AROUND YOU."


"ARMS AROUND YOU surges with relentless energy, good taste, and some of the best cello playing in any context. The nine selections also exploit his talents as a composer, vocalist, lyricist and band leader. [..] Friesen enhances many of his cello lines with some unison scat singing that gives the refined sound of his instrument more of a jazzy edge. The man also has a gift for creating melodies that are at once accessible, moving, exciting and unpredictable. [..] 'Arms Around You' shows Friesen to be a superior performer able to synthesize a vast array of influences and ideas into an entertaining, musically satisfying whole." --TOWER PULSE!